I’ve never done a “how I got the shot” blog post before. I think the only time I’ve explained the process behind a photograph I’ve taken was at the Professional Photographer of the Year 2013 awards. Of course, I didn’t expect this so had nothing prepared! But anyway, I’ve promised this blog post for a while so it’s high time I explained myself.

Before I get stuck into this blog post here’s a little warning that you should DEFINITELY READ. Going in sewers is EXTREMELY DANGEROUS and shouldn’t be done unless you fully know the risks involved and how to accurately monitor both weather patterns and water runoff. Even a short rain shower can have some sewers filling from a teeny trickle to a neck-deep torrent in mere minutes. These are tunnels that are designed to move a lot of water in a very short space of time. Respect that. As for the ins and outs of accessing them, I’m only here to discuss photography.

Before getting the shot, I’d been to the location several times over the previous year. My first time there was for a party. A party?! In a sewer?! Well yes, you see there are quite a lot of people that really appreciate the networks of ageing Victorian Architecture that Sir Joseph Bazalgette created in London, and it seems that I know quite a lot of them! 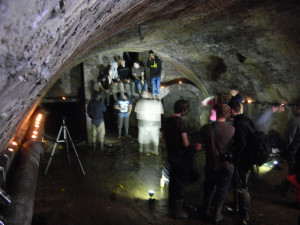 I was quite reluctant to take my DSLR in there as you can imagine. It’s not a great environment for cameras at all. There’s lots of moisture in the air and every surface either has a thin film of grime (the less said about that the better) or has been worn to a slippery smooth sheen over the course of it’s 150 year working life. I had a compact camera at the time though, a Nikon Coolpix S1100pj for those interested, so that came along for some snapshots. 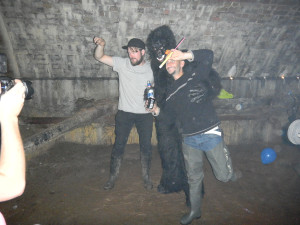 It was during this party that I first saw the junction that was the subject of my PPOTY winning photo. Although the approach was from an angle you might have trouble visualising from the final image: 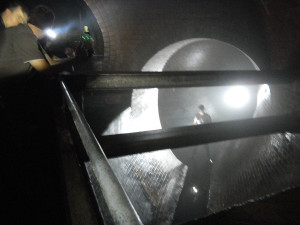 Just to help you get your bearings here, where the bright light is in the frame is roughly where the camera was set up for the final photo. Where I am stood (and the other people in the top left) is just visible in the background down the left hand tunnel in the final photo.

As soon as I saw it I knew I had to photograph it. Following another visit a few months later, I had a strong mental picture of what I wanted to create. With lighting options limited by the tunnels themselves, there was the choice between lighting from the front or lighting from behind. I opted for the latter as it would highlight the texture of these magnificent feats of Victorian engineering and give a strong contrast which would bring out the shape of the infrastructure nicely. The plan was set.

Nearly a year later, having almost forgotten all about it, I receive a call from The Winch saying that a group of students had asked him about making a documentary about us adventurous types. It was a good opportunity to go back! I packed my camera gear, a bunch of torches and flashes, a tripod and a pair of waders and set off. It was happening!

Now, the thing about having lots of camera gear when photographing sewers is that there’s not really anywhere to put equipment down. Unless you fancy getting your lenses full of water and grime, or worse having your bag washed away. It also makes positioning a tripod and lightstands very difficult. Once you’ve popped your tripod in place, it’s very difficult to get past it down the tunnel… Those walls are very steep and slippery, any attempt at passing your camera is not going to end well. Some improvisation was needed.

With the camera set in place I had to commandeer some friends to help out. I handed out some torches and flashes, then one by one guided everyone into position to get the results I had in mind. Slippery wet tunnels need not be a problem when you have human lightstands! Here’s a crude diagram, McNally stylee: 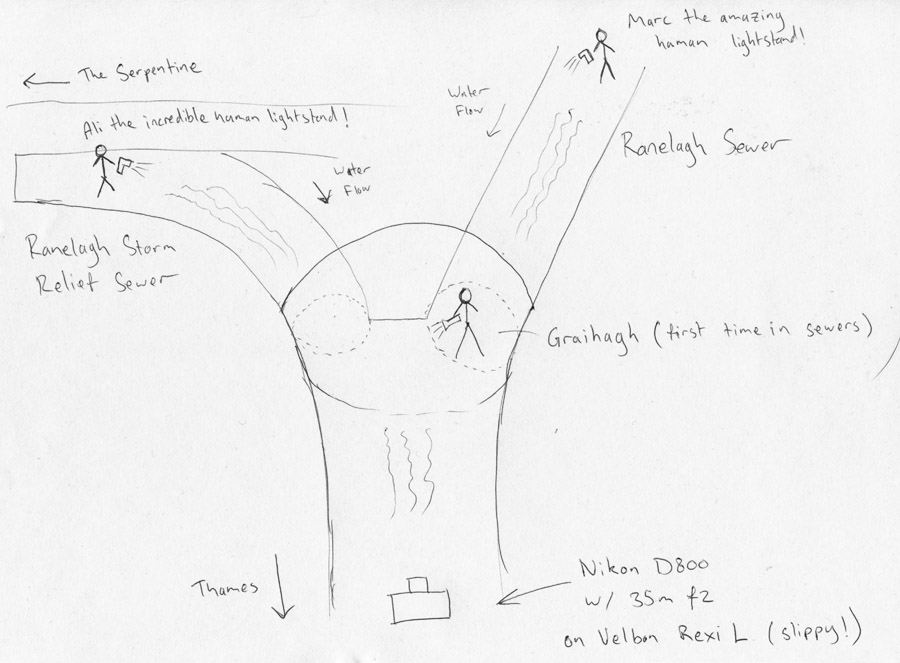 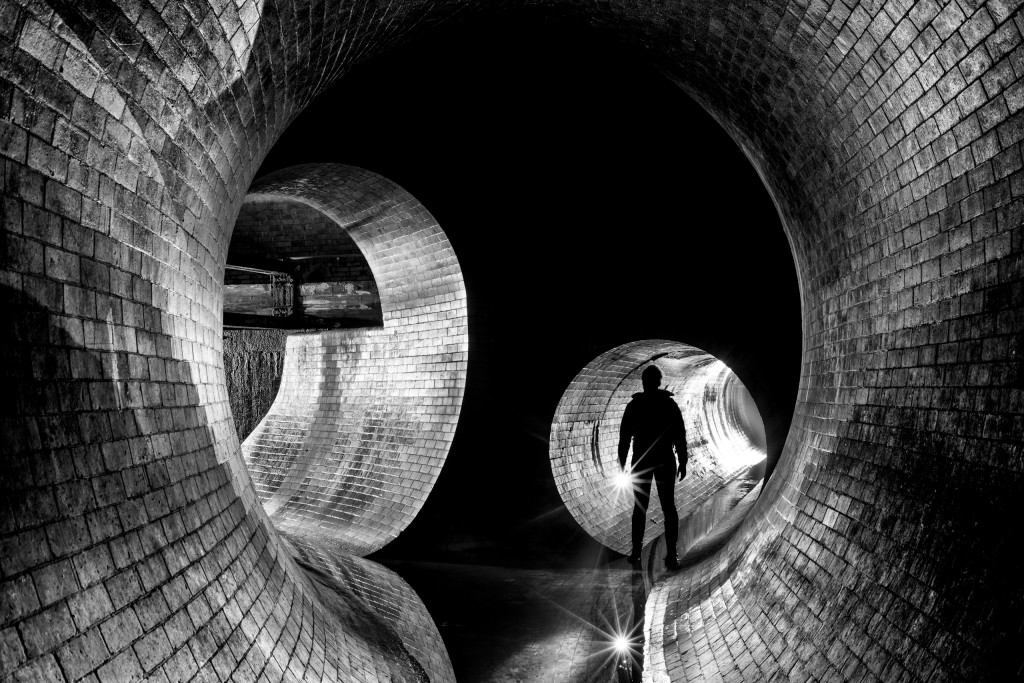 The final image, which took the overall win  in the Professional Photographer of The Year 2013 awards.

I definitely couldn’t have done it without the help of Ali and Marc who helped out shuffling around with lighting, or Graihagh who is the person in the photo. It was her first time in a sewer and she was a fantastic sport agreeing to pose for this photo. Many thanks all!